Get Radius in Miles using Latitude & Longitude in MySQL

Here is the trick to find the radius distance in miles directly from the latitude & longitude data store in your mysql table. This is a very helpful trick which i use while creating webservices for mobile apps.

A new innovative technique to create electronics circuit with very low cost materials on the paper, checkout the video.

Ever wondered that how much money has been submitted by your employer, you can checkout your EPF (Employer' Provident Balance) just by the click of the mouse.
Here is the link for checking the link for it. 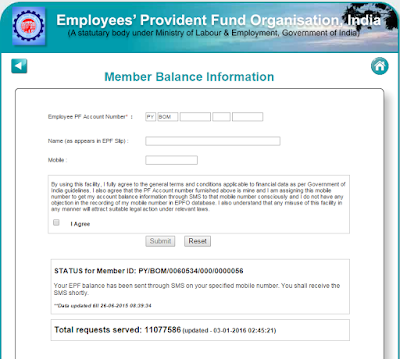 Just fill the form and you will get the provident fund balance to the phone number mentioned by your employer.

In order to deal with phonegap, you should be very handy with the initial command line interface of phonegap, this is one of the cool feature of  which lets you work very quickly and create apps with an ease, so I am going to write the  list of some must know commands which are very helpful while developing a phonegap app

Create Platforms, which lets you run your code in different OS

Add a plugin to your app

List all the plugins added in the mobile app

Get Started With PHONEGAP

This is an very interested blog about creating a mobile app with one of the latest and noted technology called PHONEGAP. I was wondering that when i will get a chance to create a mobile application, Everytime probably i was stuck between the discussion of native VS hybrid everytime. As a Web programmer my strength was always server side programming language which is PHP & client side languages like HTML, CSS, JavaScript & jQuery.

Every time i felt that learning android development using java is better than creating mobile app using phonegap's javascript's framework,because i felt the framework of phonegap would be little difficult to learn, then why not try out the android's java framework if you are giving the same effort for learning, also it has many supporting blogs now a days. One day i got a project from one of a client who was looking for an app to be developed using Phonegap and i was very excited to start it, and trust me it took me a little while to learn the initial things of framework, its damn easy and you can create big web based apps with an ease and with the same team which are creating web version.

So Here are the pre-requisite things which is required if you want to kick start with phonegap.
1).A Good Experience in HTML 5 tags.
2).Good Exposure towards CSS 3.
3).A Good Knowledge in Javascript Or jQuery, if you know any good javascript framework like angular or NodeJS then it will be awesome for you.
4).And a little experience about the mobile environment, mobile development life cycles etc.

Now to get Started just follow few steps and you will be ready to start.


Now the next step is new environment variables.

Add all the path one by one separated a semicolon

That's it now you are ready to go.

Now to make sure, everything is set, open your NODE JS command prompt and write a command "java", if it gives any info reagarding java then, the environmental variable has been set correctly.

Now we will install phonegap into our computer, to do that just write the command
npm install -g phonegap

Cordova is the latest version phonegap engine, which is a collaborated open source version of phonegap & Apache, installing the cordova or phonegap would take few minutes or may be little more which depends on your internet connection, if you have installed cordova then always the word cordova in the command lines instead of phonegap.

after this we can create our first project in phone gap as shown below.

this command will add all pre-requisite dependency files for android app development, so that it would  be ready to go for your android phone once you launch it.


This will show the list of mobile devices connected to the computer, if the list is empty then disconnect and connect the phone again.

Now Run your first app by running this code.

and this will install your phonegap app into your phone.

If you have not connected any phone to your computer then phonegap will run the app in the android default emulator.

Usually stored procedures are not used in the PHP Development, but still its a useful option for reducing the query writing practice.

Some examples of stored procedures with different types are as follow.

To create a stored procedure with in parameter you can write a query like this.

To create a store procedure with inout/out parameter you can write a query like as following.


Now to call the stored procedures you can do something like this.

if you want to execute a php code, you can write like this

To create a store procedure with inout/out parameter you can write a query like as following,
INOUT exactly works like the OUT parameter


That's it, its damn easy to go on with.